With the launch of the new IET Community site, any new posts will now be made there.
Posted by Darius Panahy at 12:51 No comments:

A recent idea posted on the CA Gen forum was to allow NOTE statements to be defined for views so that views could be better described, especially when their purpose is not easily documented in the view name. Whilst the CA Gen toolset allows you to enter a description for a view,

Read more »
Posted by Darius Panahy at 15:15 No comments:

Row Templates is a feature in Rapide that allows the data in a group view to be presented in a more sophisticated style compared to the standard row/column approach.

Read more »
Posted by Darius Panahy at 12:38 No comments:

They wanted the ability to add bookmarks into the action diagram so that they could quickly and easily move between different sections. For example, if you have to edit code in different places and move up  and down between them, rather than trying to find the locations by scrolling up and down, it is much easier to place a couple of bookmarks and then jump between them.

When considering upgrades of GuardIEn and/or CA Gen to a new release, a common misconception is that the upgrade has to be implemented all at once with the upgrade of the CSE and GuardIEn software, regeneration of code and deployment of new versions of workstation software all happening as part of the upgrade and development frozen until complete.

For example, you might currently be using CA Gen 8.5 (or earlier) for the encyclopaedia and generated code and wish to upgrade to 8.6. However not all of the applications are able to regenerate and retest their code as part of the upgrade process at present and hence the choice is either to postpone the upgrade or install a new encyclopaedia server and database and selectively transfer projects across to the new encyclopaedia.

This can be further complicated when you wish to use one release of CA Gen (e.g. 8.6) for developing a new release of the application and also maintain the production code using an earlier release (e.g. 8.5). If you implement a new encyclopaedia for the new release, migrating changes between models becomes much more difficult when they are in separate encyclopaedias.

There is an alternative...

Read more »
Posted by Darius Panahy at 12:12 No comments:

A new feature introduced to the Studio Developer action diagram editor is the ability to define inline code preferences which are then used to preset the values when adding a new INLINE code statement. 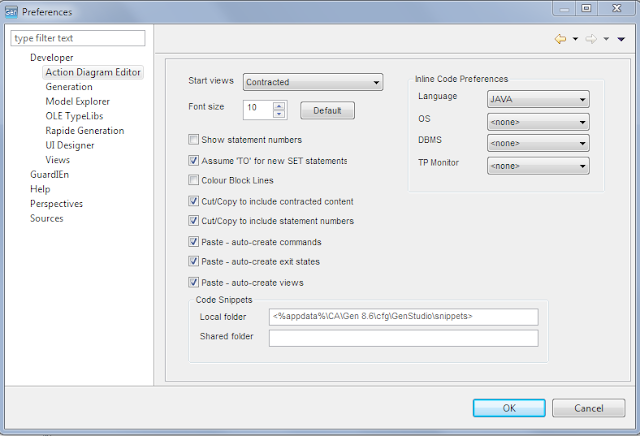 Read more »
Posted by Darius Panahy at 01:30 No comments:

A new feature in Studio Developer's Model Explorer allows you to easily list action blocks and procedure steps that have changed since the last upload of the model to the encyclopaedia. 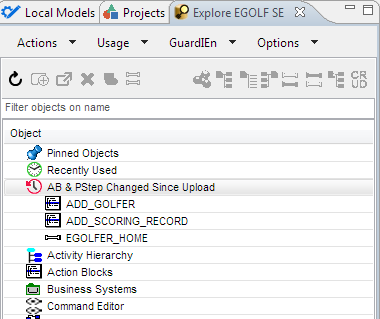 Read more »
Posted by Darius Panahy at 15:44 No comments:

Rapide is IET's product for developing advanced, multi-platform user interfaces with CA Gen. To enable the design of user interfaces that support more advanced features than the standard Gen toolset, Rapide provides a toolset plug-in that is used to specify additional properties in the UI design, for example responsive layouts where the size & position of controls adjusts automatically to fit the device or window size.

VerifIEr is IET's quality assurance and code checking tool. The best time to detect any errors is whilst you are developing the code rather than after the fact, so it makes sense to integrate the code checking with the development tool.

genIE is IET's suite of developer productivity tools, comprising both a plug-in module for toolset based features and other utilities that operate on the encyclopaedia and which are accessed from Object List+ and the GuardIEn client.

With Studio Developer, the genIE functions are now directly accessed from within the action diagram editor.